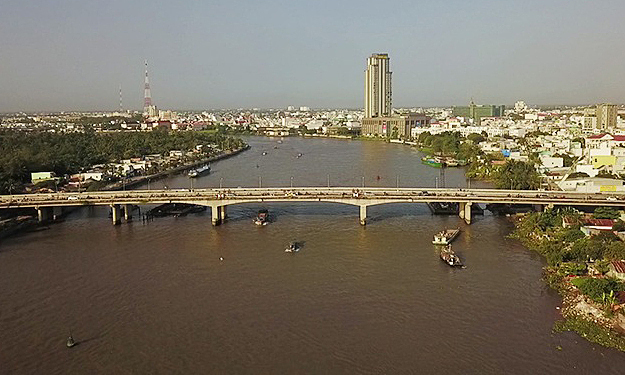 A bird eye’s view of Can Tho City in Vietnam's Mekong Delta. Photo by VnExpress/Cuu Long.

Can Tho is the latest to fall to the relentless flow of seawater into Mekong Delta rivers.

The city is nearly 100 kilometer from the sea.

A saline meter used at Cai Cui port in Cai Rang District on Wednesday read 3,500 parts per thousand (ppt), according to the Can Tho Meteorological and Hydrological station.

The water normally has salt content of less than 250 ppt. Seawater flowing up the Hau River, a branch of the Mekong, has contaminated inner-city canals too.

Over 70,000 hectares of winter-spring rice is being harvested in the city now. There are also 2,100 ha of orchards and almost 2,000 ha of vegetables, according to Nguyen Ngoc He, director of the city Department of Agriculture and Rural Development.

"There have been no reports about damage to crops yet, but the seawater level in the Hau River will remain high for the next few days, and so we have to be proactive in dealing with it."

The city Steering Committee for Disaster Prevention and Search and Rescue has urged local authorities to be vigilant about the situation and tell the public to store water needed for household use and irrigation.

Can Tho has a waterworks each in the districts of Cai Rang, Ninh Kieu, Binh Thuy, O Mon, Thot Not, and Phong Dien with a combined capacity of over 160,000 cubic meters a day.

Huynh Thien Dinh, deputy director of the Can Tho Water Supply and Sewerage Joint Stock Company, said the company is closely monitoring the situation and has plans to ensure water supply is not affected.

The water treated at the Hung Phu plant in Cai Rang District has salinity levels of around 100 ppt, twice the normal rate but well within the 250 ppt threshold. The plant supplies 10,000 cubic meters a day.

"A plant in Ninh Kieu and the one in Phong Dien, both by the Can Tho River, have very little chance of being contaminated by saltwater," Dinh said.

"Even if they are, the intrusion will only last a couple of days and during daytime."

He said those three plants supply 75,000 cubic meters a day, and in case their water becomes salinated, other plants would operate at maximum capacity to make up for them.

Can Tho is the latest victim of seawater intrusion that has occurred in 12 cities and provinces in the delta. This year it has happened a month earlier than in 2016, when an unprecedented drought caused water shortages for 600,000 families and salinized 160,000 hectares of land, causing losses worth VND5.5 trillion ($237 million).

Only Dong Thap Province has not been affected so far.

In addition, high tides during the full moon this month and the northeast monsoon pushed saltwater 50-95 km upriver, or two to 11 km deeper than in 2016.

Preliminary statistics show the intrusion has caused a severe water shortage across the delta.

It has affected 3,600 hectares of rice in Soc Trang Province and 26,000 families lack water.

The province is drilling 30 wells, which are expected to provide 30,000 cubic meters of water a day.

Tra Vinh Province is in dire need of water to irrigate over 10,000 hectares of winter-spring rice. There is a chance that the locals will lose half of these plants because of the water shortage.