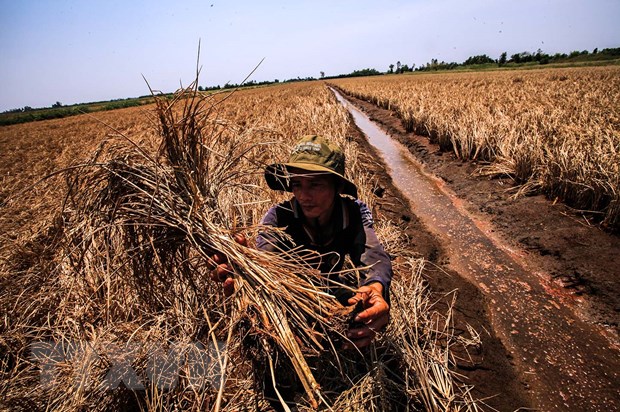 BẾN TRE — Saltwater intrusion in the Mekong Delta during the dry season, is forecast to enter local rivers 30-40km deeper than the annual average.

That is more severe than 2016, the year of historic salinity which caused VNĐ15 trillion (US$ 646 million) damage to the delta.

The concentration of salinity was about four grammes per litre, said minister of Agriculture and Rural Development Nguyễn Xuân Cường at a meeting held yesterday in the Mekong Delta province of Bến Tre.

The meeting, chaired by Deputy Prime Minister Trịnh Đình Dũng, was organised to direct localities to prevent drought and salinity intrusion during the dry season and ensure agricultural production and livelihoods for local residents.

Data from the ministry shows saltwater intrusion occurred since the middle of December 2019 in Hàm Luông River’s estuary with the concentration of four grammes per litre. The salinity intrusion has covered 57km from the estuary, 17 km deeper than 2016.

Cường said it would significantly affect agricultural production in many localities.

According to the ministry, the salinity intrusion would affect 10 of 13 provinces in the region.

In response, Cường said the ministry had directed localities to start the winter-spring crop about a month earlier than normal, to avoid the peak of salinity intrusion.

Phạm Anh Tuấn, vice chairman of the People’s Committee of Tiền Giang Province said the province had dredged canals and installed pump stations to store freshwater in the canals, actively ensuring water for both daily life and production in the dry season.

Nguyễn Hữu Lập, vice chairman of the People’s Committee of Bến Tre Province said the province had actively stored freshwater since the middle of 2019 and installed 46 stations to measure the concentration of salinity so that they could make plans to cope.

He ordered all ministries, localities and each individual to work together to minimise the impact.

Local administration were told to take drastic measures to cope with the salinity intrusion and ensure enough freshwater for both daily life and agricultural production.