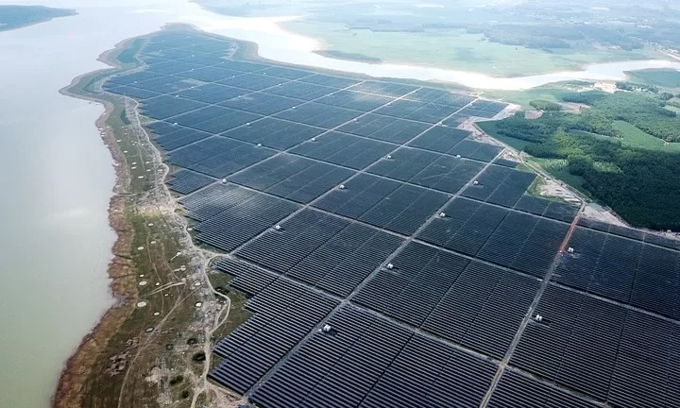 A new solar power complex in Tay Ninh Province started operations on September 7, 2019, considered the largest of its kind in Southeast Asia. Photo by VnExpress

A 420 MW solar power project, the largest of its kind in Southeast Asia, has officially started production in Tay Ninh.

The $391 million complex covers 540 hectares within the semi-submerged land at Dau Tieng Lake, the largest manmade lake in the country.

Construction on the complex started in June last year and was completed in about 10 months.

The plant is expected to provide about 688 million kWh of electricity annually, equivalent to the consumption of nearly 320,000 households. It is estimated that electricity generated by the farm can meet the power demand of Tay Ninh and supply additional power to the southern region.

Nguyen Van Binh, head of the Central Economic Commission, said at the inauguration ceremony that the plant would help turn Tay Ninh into one of the country's "capitals" of solar power.

"It will contribute to the valuable resources of green and clean energy, while helping ensure national energy security and boosting local socio-economic development," he said.

Tay Ninh is reportedly a province with great potential for renewable energy. It already has 10 solar power projects, six of them in the semi-flooded area of Dau Tieng Lake.

The 10 projects are estimated to generate a total capacity of 808 MW. Nine of them have begun operations, producing 668 MW of electiricty.

Vietnam has great potential for renewable energy with 2,700 hours of sunshine a year, according to the Institute of Strategy and Policy on Natural Resources and Environment. The government has issued several policies to attract investment into renewable energy towards reducing the country's dependence on thermal power.

Solar power currently accounts for 0.01 percent of the country's total power output, but the government plans to increase the ratio to 3.3 percent by 2030 and 20 percent by 2050.

Vietnam now depends largely on hydropower and thermal power plants for its electricity demands, but the projects have often drawn criticism from both local and international communities for their adverse environmental impacts.

The country aims to produce 10.7 percent of its electricity through renewable energy by 2030, mainly through solar and wind energy.