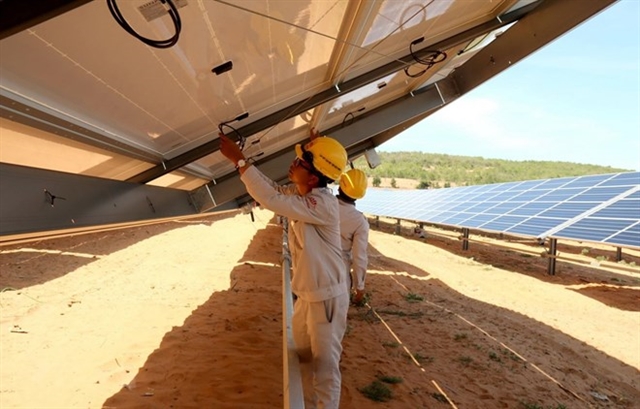 Under the country's renewable energy development strategy, which was approved by the Government in 2015, Việt Nam is aiming to increase the ratio of electricity from renewable sources from 35 per cent of total output in 2015 to 38 per cent in 2020 and 43 per cent in 2050.

According to Nguyễn Văn Vy, Vice Chairman of the Việt Nam Energy Association, Việt Nam has abundant potential for renewable energy thanks to a long coastline and weather conditions favourable for the development of hydro, wind, solar, biomass and geothermal power, as well as bio-fuel.

The Việt Nam Electricity has signed power purchase agreements (PPAs) with more than 100 solar power projects, two of which have become operational with a combined capacity of 86MW.

So far, electricity generation from renewable sources, excluding medium- and large-scale hydropower plants, has accounted for 2.1 per cent of the country’s electricity output.

Đỗ Đức Quân, Vice Director General of the Electricity and Renewable Energy Authority under the Ministry of Industry and Trade said that in order to encourage renewable energy development, the ministry has submitted to the Government proposals on various mechanisms such as a Feed-in-Tariff mechanism, as well as incentives for investors in access to credit, corporate income tax, land use and PPAs.

However, Quân pointed out that the rapid growth of renewable energy recently has also created a number of challenges such as high investment cost, pressure on electricity grid infrastructure and large demand for land.

According to a report from the Việt Nam Electricity, renewable energy development has also faced challenges due to a lack of official guidelines. Because there is no clear guideline on payments, the companies has not yet been able to purchase households’ rooftop solar power.